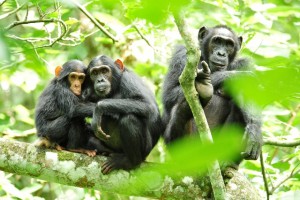 Uganda is also known as the “Pearl of Africa,” and is amongst the best safari destinations in Africa. When it comes to Uganda wildlife safaris, the most popular attractions are gorilla and chimpanzee trekking.

Uganda is one of the most sought-after destinations for tourists for an African safari adventure. The spectacular landscape encompasses wide-open savannah, rainforest, alpine mountains, lakes, and rivers.

The Pearl of Africa is often overlooked for game drives and bird-watching safaris. Uganda with more than 1,000 bird species is the birding capital of the Dark Continent.

I have listed within this post, some of the best destinations of the Pearl of Africa that you should include in your safari experience. Of course, there is the trekking of primates! However, don’t spend your entire vacation trekking the gorillas or the chimps, there is so much more to see in Uganda!

So, without any further ado, let’s get you acquainted with Uganda’s treasure!

Don’t forget that you need a permit for trekking the gorillas. For many years, the poachers have hunted the gorillas for their hands and their heads. To stop the poachers and to protect the mountain gorillas, patrols were set up. The way to finance those patrols is with the gorilla permit fees. The government determines the cost of the gorilla permit. Therefore, the price is subject to change without any notice. So, I would recommend that you put aside a total budget of 1000 USD to cover all costs such as the permit fees and visas.

There are only ten permits per gorilla family issued per day, which is why they are expensive. The park doesn’t issue many permits to limit the gorilla’s exposure to humans. Since the gorillas are our closest relatives, they are sensitive to human diseases.

The gorillas have been habituated to the presence of people. So, the gorillas will not attack since you are not a threat to them. A ranger will guide you through the jungle for your encounter with a gorilla family.

You need to be in good health and physical condition to undertake gorilla trekking. The trek could last anywhere from 45 minutes to 8 hours. Once in the presence of the mountain gorillas, you are allowed to spend 1 hour in their company. The reason for this is to prevent mountain gorillas from getting used to the human presence. This is plenty of time to observe them and take pictures.

Uganda is by far the best destination in Africa for gorilla trekking.

Want to Learn More about Gorilla Trekking in the Pearl of Africa!

There are about 120 species of mammals in the Bwindi Forest such as the forest elephants, and also many species of primates.

The Bwindi Impenetrable Forest harbors 348 species of birds. The African Green Broadbill, the Shelley’s Crimsonwing, the Cardinal Woodpecker, and the Cassin’s Hawk-Eagle are among the birds found in the forest. The forest is an ornithological paradise for nature lovers and wildlife photographers.

Furthermore, the rainforest contains more than 200 species of butterflies. If you are lucky, you might catch a glimpse of the African Giant Swallowtail or the Cream-banded Swallowtail, both endangered species.

The Kibale National Park encloses many landscapes such as rainforests, grasslands, and swamps. Therefore, the park offers its visitors abundant and diverse wildlife. Nature lovers, you will be dazzled by the picturesque scenery.

Kibale Park is known as the primates’ capital of the world. The park harbors the highest concentration and largest number of primates on the planet.

A permit is needed to track the chimpanzee. The number of permits issued each day is limited. So if you want to go chimpanzee trekking, plan ahead, get a permit first.

The chimpanzee is by far the most famous primate when it comes to trekking in the Kibale National Park. However, don’t focus solely on the chimps, since the park encloses 13 species of primates. As a matter of fact, the Red-tailed Monkey and Grey-cheeked Mangabey are deserving to be included in your trekking safari.

Here are some of the general rules to follow when tracking the chimpanzee:

Bird watching is very popular within the Kibale National Park. The Park is a birding paradise with 375 species of birds, and the ideal destination for nature lovers and ornithologists. Among the birds living in the park, you have the Green-breasted Pitta, the African Shrike-flycatcher, and the Black-capped Waxbill.

The Bigodi Wetland Sanctuary is just outside the Kibale Park, in the Magombe swamp. The wetland is another renowned destination for bird watching with 138 species of birds. The most distinguished resident of the marsh is the grand Blue Turaco.

The Queen Elizabeth National Park was established in 1954. The Park was named after Queen Elizabeth II. It is well-known for its broad array of wildlife. The Park encompasses the following ecosystems: open savannah, rainforest, swamps and crater lakes.

Queen Elizabeth Park contains more than 600 species of birds. Among them, there is the Malachite, the Grey-headed Kingfisher, and the African Fish Eagle.

Queen Elizabeth Park is a great safari destination for game viewing drives with more than 95 species of mammals. You will encounter herds of elephants, hippopotamuses, leopards, lions and chimpanzees and much more.

The fame of the Murchison National Park is due to its prestigious guests: Humphrey Bogart and Katherine Hepburn. They visited the park in 1951 while filming the African Queen.

The Murchison Falls and the Nile are two of the most well-known attractions of Murchison Park. The Falls are formed by the waters coming from the Nile and going through a small gorge and plunging some 141 feet (43 m) below.

Cruises are available on the upper and the downstream part of the Murchison Falls.

The Nile crosses the Murchison Falls National Park. Naturally, the Nile has always been an enticing destination for tourists over the centuries. The Nile harbors a large concentration of hippopotamuses and crocodiles.

A picturesque scenery ranging from savannah, woodland, wetland, and the tropical forest is found within the park.

The Murchinson Park is the refuge to more than 76 species of mammals. The wildlife includes giraffes, antelopes, buffalos, elephants, leopards, lions, and rhinoceros. Game viewing drives are possible within the Murchison National Park.

The Murchison National Park is a great destination for bird watching safari with more than 450 species of birds. The African Fish Eagle, the African Skimmer Goliath Heron, and the Shoebill Stork are among the residents of the park.

The first thing that comes to mind at the mention of Uganda is trekking. Yes, it is true that Uganda is the preferred destination for primates trekking. However, Uganda has more to offer than just the primates to its visitors!

The “Pearl of Africa” is the destination of choice for bird lovers. In fact, Uganda is an ornithological paradise. There are more than 1,000 species of birds!

If you are interested in discovering the many facets of Africa’s crown jewel, you should take a look at my full review here.

If you have any questions about traveling to Uganda, please leave a comment below. I would love to hear all about it!